Walking 'The Way' with Phyl and Joe

My sister, Phyl, has wanted to walk the Camino de Santiago de Compostela in Spain since coming upon a in-flight magazine article about the pilgrimage on a long haul flight. It was soon after this discovery that 'The Way', written and directed by Emilio Estevez and starring his pop, Martin Sheen, became her favourite go-to, rainy-day film.

For a female perspective about the Walk, I suggested that we simultaneously read Shirley MacLaine's book 'The Camino: A Journey of the Spirit'. In this book, Shirley chronicles her solo walk of the Santiago de Compostela, which includes a race to the death with a pack of dogs, a trip into her past life as a prince of Atlantis and the horrifying yet remarkable decline of her hair colour which she disguised as only a Hollywood veteran would know how to do; by wearing a fishing hat.

I might suggest a more capable source of information for your trip.

For my sister's milestone birthday, with much trepidation and a hefty fear of third-wheeling, I agreed to walk the Camino de Santiago Compostela with my sister and her husband in our vain attempt to out-Shirley Shirley. Shirley, in her sixtieth decade, was brave enough to walk the entire 500 miles (780km) of the trek, whereas the three of us were only keen on the last 100K, from Sarria to Santiago, which is a common route to take.

The 100K journey still counts as a major achievement since the hardest part of the Walk is clearly the three hour wait in the Pilgrim's Office for the Compostela, which is the certificate of completion. Who really needs a piece of paper when all you really want to do is take a shower and chop off your own feet?

The Camino de Santiago, or The Path to Santiago, was originally a Christian pilgrimage to the shrine of the apostle Saint James the Great, in the Cathedral of Santiago de Compostela.

True pilgrims in the Middle Ages started their journey in Saint Jean Pied de Pont, France and walked the 780km through Northwest Spain to Santiago. There are many different routes to take for Pilgrimages to Santiago, but this route is still the most well-known and is considered a Unesco's World Heritage Site. Walking 'The Way' is now very popular with people looking to deepen their spirituality, or simply to achieve a goal and test their fitness.

We planned the trip in early October for weather that was neither too hot or too cold, with little rainfall expected, and booked it through an agency that specialised in The Camino so everything, including our daily milage schedule, was planned out perfectly.

There is a choice of accommodation; from tenting for brave, to hostels to bed and breakfasts for those of us who prefer not to carry their luggage on their backs. We stayed in very charming bed and breakfasts along the way, but bring earplugs as the walls are thin and you may hear noises you don't want to hear! I was once directly below Phyl and Joe and could hear entire conversations about pain relief and most upsetting, sqidging bathtub noises! At least I knew without asking that they were clean!

Our luggage was transported for us each day and arrived at our new hotel before we did. After an average of six hours of walking per day, this was very much appreciated.

On Day One, my plan was to limit my water intake as I was not at all looking forward to using my pink lady pee-funnel in the great outdoors, especially in the company of my brother-in-law. This plan, however, resulted in dehydration and a massive headache that was only soothed by a massive beer at the end of the day's walk. I did not make that mistake again as I learned that there are many cafes along the way with available toilets. It was a great relief not to need my funnel, and stopping for the tea and coffee offered at the cafes was a great relief for my tired feet as well. 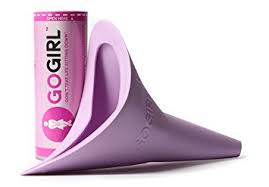 At the beginning of the Walk, the path is packed with people just starting out. You soon come to recognise the same people at all of the Pilgrim Passport stamp points and standing in line at the loos.

With nothing really to do but walk and think about trees and not wanting to pee on them, imaginations can be fed and strange fascinations can develop about the motives of the other pilgrims. Some groups, in particular a few made up largely of beautifully made-up women, that we seemed to pass by every hour of so. It was bewildering to us that no matter what cafe or T-break we made, they were always there before us, and did not appear to have the looks of agony as well did. As it turned out, these groups walked the Camino with the help of Greyhound, as we finally spied their cheeky tour bus hiding a few side streets away. One could say that the hardships and personal endeavour needed to walk 100K does, in fact equal to that of sitting on a bus.

Finally, after four days of walking, there wasn't a better feeling in the world than arriving in Santiago, checking into the San Francisco Hotel Monumento and throwing away my shoes. I had no problem at all walking around the five-star 18th Century, Unesco Asset of Cultural Interest hotel in my fuzzy Crocs, nor was I ashamed to wear them to the Cathedral de Santiago, where we were lucky enough to attend mass. I might have even been wearing socks.

Packing is very important as you want to take only what you need. The most important thing you will need is proper foot care. The guide books recommend running shoes as the best option for the walk as you will be on mostly dirt or paved roads that are easy to walk on.

What the guide books don't tell you is that, other than your toenails falling off, your feet will swell to three times their normal size and, after day two, your running shoes will no longer fit I would suggest taking an extra pair of running shoes, one or two sizes bigger.

I have since spoken to other pilgrims who did not seem to have the same feet problems that I had. Perhaps flexible hiking shoes would do a better job, but I think you need to try out different options on long walks before you go, and come up with the solution that best works for you.

Take lots of socks, bandages, blister and corn care, petroleum jelly for your feet and paracetamol for the rest of your body. Most importantly, don't forget your Crocs. The shame I feel for recommending Crocs is outweighed by the relief I felt slipping my feet into my shearing lined spongy shoe pillows at the end of each day.

The walking sticks are essential. Buy a pair of collapsable ones for packing, then watch a youtube video for how to use them properly. DO NOT DRAG YOUR STICKS!!! It messes with the karma.

I didn't achieve enlightenment or a place of deep self-reflection on my Camino de Santiago, but I did enjoy the challenge of the walk, the peacefulness of nature and the company of my family. It is a challenge worth taking for anyone of basic fitness who has an interest in doing something a bit out of the ordinary on their holiday.