The Forest of Dean is a geographical and historical region in western Gloucestershire, England. This English forest is 42 square miles (110 square meters) of mixed woodland including one of the few surviving ancient woodlands in England. The River Wye offers visitors a variety of water sports and leisure activities and picnic areas are abundant. The Forest of Dean is a rambler's paradise as many walking & cycle paths and hiking trails weave their magical way through a large variety of trees Accommodations on offer include glamping domes, shepherd's huts, luxury camping tents, boutique hotels, golf and spa resorts and a variety of B&Bs.

When I first started writing this blog, I thought I should at least try to know what I was doing. So I joined a travel writing course at the local adult education college to brush-up on some old skills, and learn some new ones. The class was a combination of students who came from various writing backgrounds, and a teacher that was well informed and well-jaded from her life-long career as a travel journalist. I was certainly a fish out of water!

Our first assignment was to read and emulate an article about the Forest of Dean by A.A.Gill, an English writer best known for his travel writing and food critiques. After reading his first, perfectly crafted paragraph, I realised my limitations and decided to focus on the travel and do my best with the writing. I set my sights on the Forest of Dean. Three years late, after unsuccessfully lobbying the family to join me for a weekend stay in a glamping bubble during Covid-Lockdown, I finally made it to the Forest of Dean.

The forest was different here: darker, weightier, with an old lethargy; the trees crosshatched and stippled, inky green barbs of yew, the flickering scales and tense, pale trunks of beech, thick-ankled cudgels of long-neglected coppice. Ivy and moss clagged and fretted the branches, and the ground was rotting, soft, embroidered with hart’s-tongue fern, bracken and brambles.

The Sculpture Trail is a good place to start your Forest of Dean adventure. Established in 1986, the trail is .... of woodland featuring sculpture by David Nash, Magdalena Jetelova, Ian Hamilton Finlay, Cornelia Parker and others. The featured artists were given a very clear brief; they were to create pieces that reflected the particularity of the Forest of Dean, without thought to wider concepts or issues. Each piece, though specifically located, feels happenstance, as though the visitor has come upon it by chance 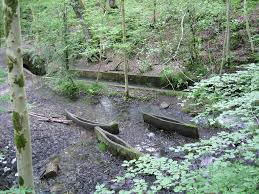 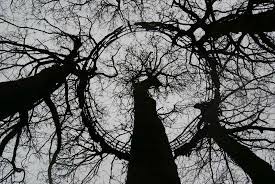 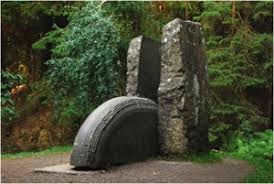 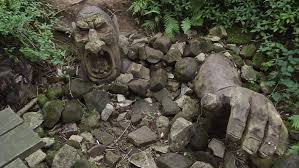 Beechenhurst, on Speech House Road is the start-off point of the Sculpture Trail. It has a pay-per-hour car park, cafe, toilets, picnic and barbecue area, and a children's playground designed by Andy Frost. They also have a Go-Ape Tree Top Adventure and family bike trails. Here you will find over 4.5 miles of hiking trails that criss-cross the forest with different degrees of difficulty.

The Forest of Dean makes life easy for the film location scouts searching for mythical places where faeries can frolic, magicians can make magic and hobbits can, well, hobbit.

Puzzlewood, near Coleford, is a 14 acre ancient woodland within the Forest of Dean. An ancient woodland is a woodland that has existed since before 1600. Planting was uncommon before 1600, so ancient woodlands would have developed naturally. There is over a mile of pathways to wander through the caves, cracks and rock formations. It is fine for capable children, but is not handicap accessible or good for buggies. Dogs are also not allowed but there is a petting zoo at the woodland entrance.

The geological features of the woodland are called scowles. Scowles form when carboniferous limestone cave systems uplift, erode and are exposed at the surface. These erosions made it easy to access the iron ore, which was rich in the area and mined by early settlers to Roman invaders. 3000 Roman coins were found stashed in a rock cavity in 1848 and a treasure hunt for Roman coins now feature as a game for visitors.

It features in at least two Harry Potter films and is the rumoured birthplace of Rubeus Hagrid. It is also in Puzzlewood that Rey meets Kylo Ren in Star Wars: The Force Awakens.

I certainly would have woke up if stumbled upon by Chris Hemsworth as he filmed The Huntsman: Winter's War here in 2016. 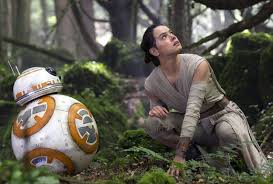 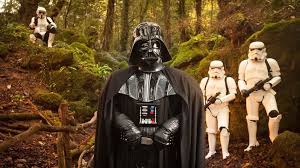 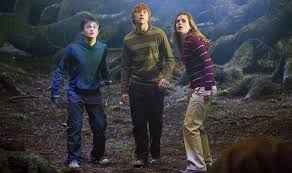 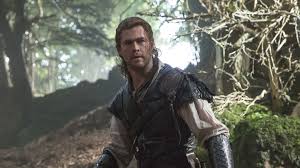 One thing that was set in, but was apparently not filmed in the Forest of Dean was the Killing Eve episode 'Smell you Later' (series two, episode five). In this episode, psychopath Villanelle roughs up fellow assassin, The Ghost, in a red shipping container plonked in a pine forest, while wearing a ball gown. Forestry England said the show was not filmed in the forest, but it might have been shot in the neighbouring Cyril Hart Arboretum. 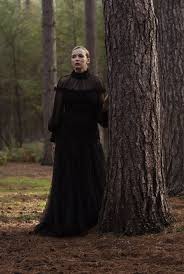 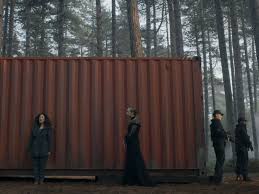 The Cyril Hart Arboretum, named after naturist and forestry expert, Cyril Hart is a collection of over 200 interesting tree varieties brought to England in 1915 by Victorian plant hunter, Ernest Wilson. A plant hunter?! There is half mile walking path that loops around inside the 35 acre arboretum, with grass paths on the outer areas to lengthen your walk if you choose.

I was looping around when I came across an open area in a pine forest. Walking to the end, I spotted rutting in the Earth and told myself that I definitely found the area where the shipping container was and the scene had taken place.

Netflixers will have been transfixed by the forest's natural beauty in series The End of the F***ing World and Sex Education. I spent a good three hours looking for the red house in Sex Education. The house, home to Otis and his sex therapist mother (Asa Butterfield and Gillian Anderson ) is named The Chalet, is in Symond's Yat. Symond's Yat near Symonds Yat Rock is a village in the Wye Valley on the banks of the River Wye, in Herefordshire, close to Gloucestershire border and Monmouthshire on the Welsh border. It is a hot spot for river activities and very popular with tourists. It also has single-track roads, dead-ends, unmarked one-ways, no-u-turns and all sorts of other impediments to house-stalking. After a lot of 10-point turns in very small streets, along with a whole lot of swearing, I found the house. Well, I found the house, but I couldn't get to the house as it is at the end of a private drive and cannot be seen from any other location that I could find. I have no idea how they manage to shoot it in the series.

Forest walks, nature and mysticism might be good for some people, but these meditative exercises might not be for everyone. Some people need to let loose and bang some heads. If you belong to a blended group, the Forest of Dean has something to make every member happy.

If you are, or someone you love is, into aged headbangers and are nostalgic for British heavy metal, head to Clearwell Castle in Clearwell, Gloucestershire. Clearwell Castle, is a Gothic Revival house built in 1727 by Thomas Wyndham based on the designs of Roger Morris. It is oldest of Georgian Gothic Revival castle in England.

In the 1970's, the castle's owners installed a recording studio and the it became very popular with some of the biggest bands of the decade. Led Zeppelin wrote and recorded In Through the Out Door at Clearwell Castle. Deep Purple, Mot the Hoople, Bad Finger, Queen and Whitesnake all recorded here. The Gothic Revivalism and sorted history of Clearwell Castle must have provided great inspiration for an occultist band like Black Sabbath. The band stayed at the castle while writing and recording Sabbath Bloody Sabbath, and experienced many spectral visits.

UK: Apparitions and Alchemists, Just Another Walk in the Wiltshire Woods