Galway City Break: Ireland's Gem on the Bay Coast. And a Stay at the Galmont Hotel & Spa

#AerLingus and #RyanAir are currently running discounted flights to many parts of Ireland from London.

Galway, Ireland's fifth largest city, was very central to everything I wanted to do on my most recent trip to Ireland. This city gem lay between Shannon Airport, Croagh Patrick and Westport and the Cliffs of Moher and the Wild Atlantic Way.

It was also the subject of an Ed Sheeran song, Galway Girl, which was played frequently on our journeys.

Eyre Square is a public meeting square just outside of the Latin Quarter. While we were visiting there were food tasting stalls, art exhibitions and followers of the new craze, silent dancing. It took only a minute to discern the dancers were having a 'Mama Mia night.'

At 1 Eyre Square, Richardson's Pub has great chicken wings and pulls a great pint of Guinness! 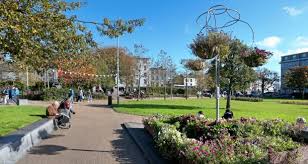 Around the corner from Eyre Square is one of Galway's biggest tourist destinations; The Latin Quarter. This area is a collection of cobbled streets heaving with local shops, eateries and traditional Irish musicians busking for donations. Quay Street flows through the Latin Quarter. Not far from here you will find Kirwin's Lane. Tight pedestrian streets weave this collection of stone buildings, with elements dating 16-17th century , now housing more pubs and shops selling Irish woollen goods and crafts. 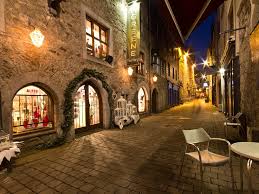 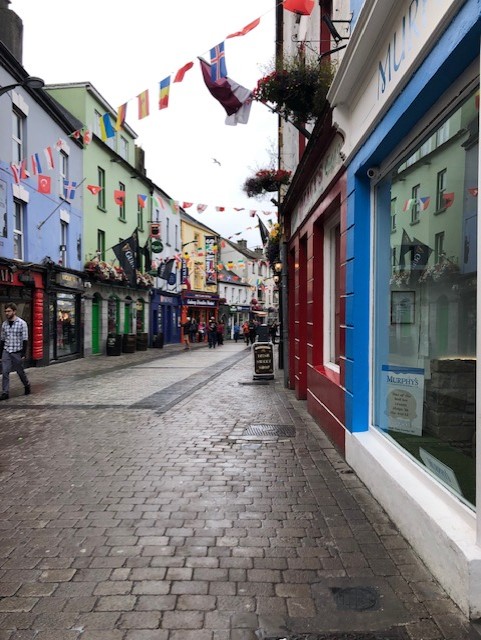 The Spanish Arch, an unlikely tourist attraction, was built in 1584 as part of a fortifying wall along the River Corrib. The arch is all that survives, and barely that, of this wall. My research tells me that this arch was partially destroyed in 1755 by a tsunami cause by Portuguese earthquake and expanded to allow for easier traffic on the Long Walk to the fish market. But what I could not determine was why it is called 'Spanish'. It was not a decorative feature, or a style and was probably called Eyre Arch while in use. Why Spanish? No one seems to know.

Visit the arch for a moment, then walk in either to the docks or over the River Corrib to Claddagh. Formerly a fishing village, Claddagh is across Galway Bay from the Spanish Arch.

I wanted to visit to learn the history of the Claddagh Irish love ring, and because former fishing villages are very quaint. However, the ring was designed by a designer in the Latin Quarter, and the thatched houses of the village were razed for a council-house scheme in 1930. So visiting Claddagh really depends on how bad your feet hurt and how much time you have on your hands. Perhaps from the Spanish Arch, take the tow path along the River Corrib toward the Galway Cathedral. 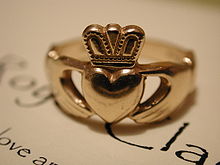 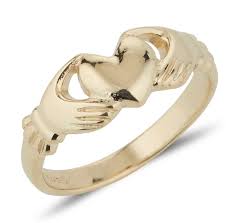 The Claddagh ring symbolises love, loyalty and friendship. These rings, originally designed in the Latin Quarter of Galway, have been part of Irish culture since the 1700's. The Fenian Claddagh ring is absent of it's crown. Though not as popular in Ireland, this is the style of ring I remember from high school in the USA.

THE CATHEDRAL OF OUR LADY ASSUMED INTO HEAVEN AND ST. NICHOLAS

The Cathedral of Our Lady Assumed into Heaven and St. Nicholas, not far from Eyre Square and Nun's Island, is one of the most impressive buildings in Galway. Built in 1958 on the site of an old prison, this is last stone cathedral constructed in Europe.

The dome and pillars suggest Renaissance style. Other features, including rose windows and mosaics echo traditional Christian art. The dome is 44.2 meters (145high) and is a prominent landmark on the Galway skyline.

The church holds mass several times daily. They have a 50 year old pipe organ, and a choir that specialises in 16-21st century music, Gregorian chants and traditional Irish music.

They also have holy water on tap!

If after all this your feet really do hurt, book a tour on the Corrib Princess River Cruise or a ferry to the Aran Islands. As faithful readers will know, I never manage to get to a ferry on time, so this trip was out for me. Looking at photos afterwards, I regret my lack of effort to get there. This is an area of outstanding natural beauty and a great extension to the Wild Atlantic Way.

Central to Galway is the Galmont Hotel & Spa, where we stayed for the few days of our visit. This hotel is very well located; close to the train and bus depots, Eyre Square and the tourist attractions of Galway.

Not the Galway Races

Staying at the Galmont is perfect for attending horse races at the Ballybrit Racetrack, and the hotel hosts many special events during the Galway Races festival week. The 7-day festival begins on the final Monday in July and is the one of the largest horse meetings in the world.

The Spa has some very lovely treatments and I enjoyed the signature sea shell massage. This treatment is similar to a hot stone massage and differs in that the stones are heated in an oven and lose their heat. The shells have an internal chemical heating element, which keeps them warm throughout the treatment.

The spa has a large wet room, at additional cost. This is discounted if you are having a treatment. There are heated beds, aromatherapy, light therapy, sauna, steam, ice bath, rain showers and, usually, a room filled with sand. The jacuzzi is located in the swimming pool/gym and was out of order during my visit.

While the treatments were lovely and the staff very skilled and courteous, I did not appreciate the pool area, jacuzzi and locker rooms were on a different level of the hotel to the spa, and the facilities could use an upgrade. I also prefer use of wet rooms and pools to be complimentary if booking a treatment.

Notes about the Galmont: The hotel appears to have been added to over the years and finding your way can be a bit confusing. There were too many slow lifts and no stairs that were not for emergencies only. I find it inconvenient to take a lift down one flight of stairs as I am able-bodied and prefer the exercise.

The Galmont also has no air-conditioning. This might be fine for a small B&B, but I think that a large hotel should have an air-circulation system of some kind, regardless of the weather.

They have a very good continental breakfast and the restaurant was also very good. The Galmont also has a bar, serving all types of cocktails, wine and beer as well as good pub food.

All this said, I still enjoyed my visit as was very appreciative of the hotel's location and the quality of their staff. They also have on-site garage parking.