Hygge (hoo-ga) is the Danish term used for 'cozy contentment'.

It is 15 minutes by bike from the Axel Guldsmeden in Vesterbro, to the City Centre of Copenhagen. Within minutes of my arrival in Denmark, I stepped smack into a cycle lane and I was not going to go anywhere near a bike.

Vesterbrogade is a main road That runs from Carlsberg to the City Centre. Closer to the centre, is Tivoli Gardens. Sounds lovely and Italian but Tivoli Gardens is an amusement park, not a garden, right in the middle of Copenhagen.

Tivoli Gardens opened 175 years ago on the 15th August, 1843. It is the world's 3rd oldest amusement park and operates the 3rd oldest wooden rollercoaster. Wurstelprater in Austria is second and the oldest, Bakken, in 1538, on the other side of Copenhagen. Consider that before you jump on to one of Bakken's six rollercoasters. 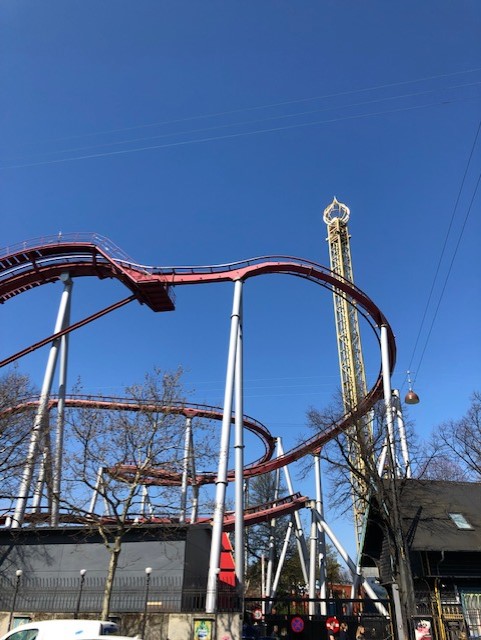 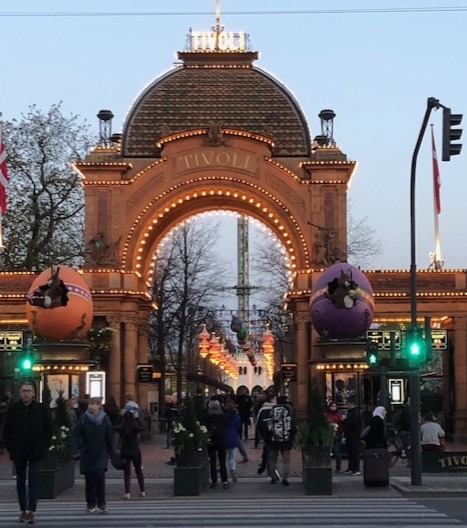 I would have loved to have walked through the park with a non-rising pass. But, I do not think this is available.

Crossing City Hall Square, I entered the City Centre. City Centre is a typical European district. There are winding alleyways, cobbled streets, designer shops and one billion tourists. Romance. It was so crowded I walked through without stopping. Struggling with too-big shoes, I tried not to trip on a cobble or a self-taker, as I moved onto my next destination.

Next was the picturesque canals of Nyhavn. Here is the money shot. Al Fresco dining lines the canals in front of pastel hued houses. Native Copenhagener Hans Christian Anderson wrote his famous fairy tales at #20, #16 and #18.

Turning left onto Toldbodgade, I made my way to the Amalienborg Palace. Four identical buildings comprise the palace compound. It includes the homes of the current Crowned Prince, the Queen and a couple of guest palaces. 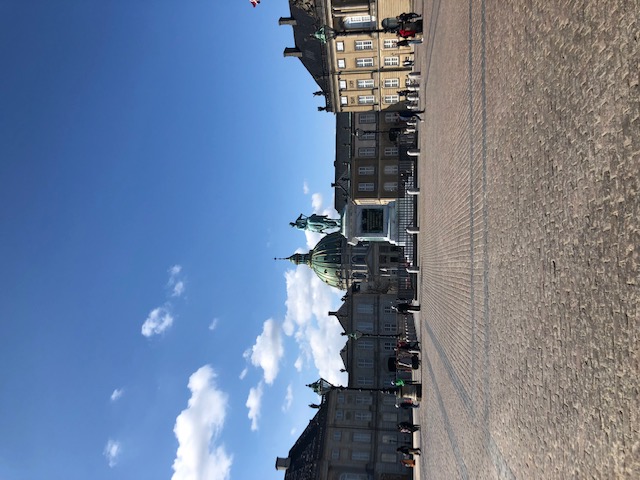 Amalienborg Palace is famous for it's Royal Guard, or Den Kongelige Livguarde. It was here that my floppy footed shoes and the incongruent cobbles got the better of me. I am certain I saw the guard pull his rifle on me as I lunged forward, face planting on the pavement. Right in front of the guards. Rolling around on the ground. The Kongelige Livguarde fearing for his safety.

Limping along Amaliengade toward Langelinie, I spotted what I had walked so far for: Den Lille Havfrue. This Little Mermaid, sculpted from bronze by Edvard Eriksen, sits on a collection of rocks on the edge of the harbour. She is 4.1" (1.25m) tall and weighs 385 (175k) pounds.

She has endured in, roughly, this spot since 1913. She has been decapitated, arm-ablated, bombed and racially profiled in anti-EU protests. But this mermaid has never had to protect herself against hoards of Instagramers crawling all over her body. What some will do just to get that perfect peace-sign pic.

*the nearby park Langelinie Park has very clean toilets for public use.

Once again, I rely on my iPhone compass. It points me to the re-generated warehouse district, Dahlerups Pakus, and the Genetically Modified Little Mermaid.

This Little Mermaid, by Bjorn Norgaard, sits is the same position as the original. This mermaid had the last laugh because there was no one there. Not a sole. I was alone in a park full of art and there was no one else there. That's worth a peace-sign pic, for sure.

Speaking of peace, onto the final stop, Christiania Freetown.

Squatting in this 7.7 hectare former military barracks began in 1971. The aim of this community was to establish self-governance. This quickly devolved into the hippie, collectivism and anarchism movements of the 70's. The 1000 or so permanent residents of Freetown still make and live by their own rules. In 1994, they paid their first council taxes. And after tense negotiations, the residents agreed to purchased the land they live on.

Hard drugs are frowned upon in Christiania, but weed and skunk openly sold on Pusher Street. Though I could not conclude if this is legal, a man being frog-marched by five Danish politiet made me think not. But taking photos on Pusher Street is strictly against the (self-made) rules.

The residents live in, what looks like self-built housing, and viewing these were a real treat. There are also many businesses and community service buildings. Gay House has long been a centre for gay rights activism in Denmark. Glass House exemplifies 'architecture with architects'. The average age of Christiania Freetown is probably 60, so the numerous skateboard parks seem a bit superfluous. 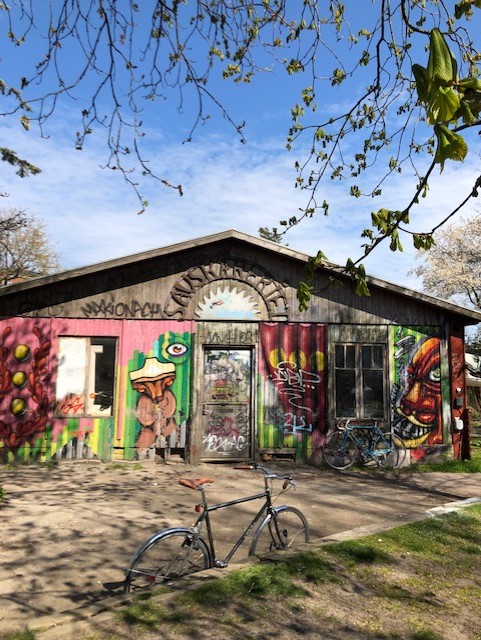 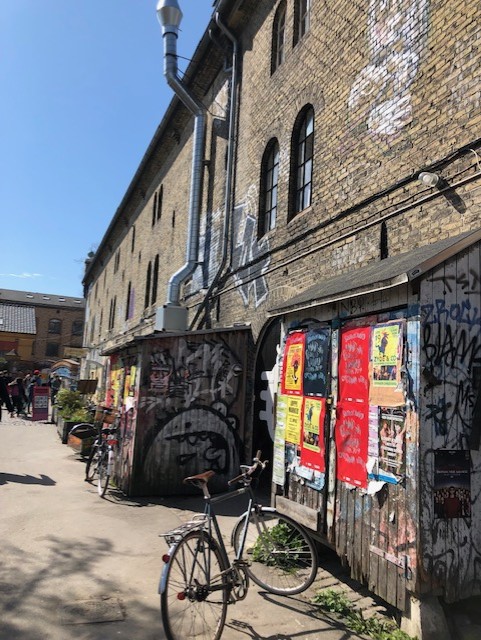 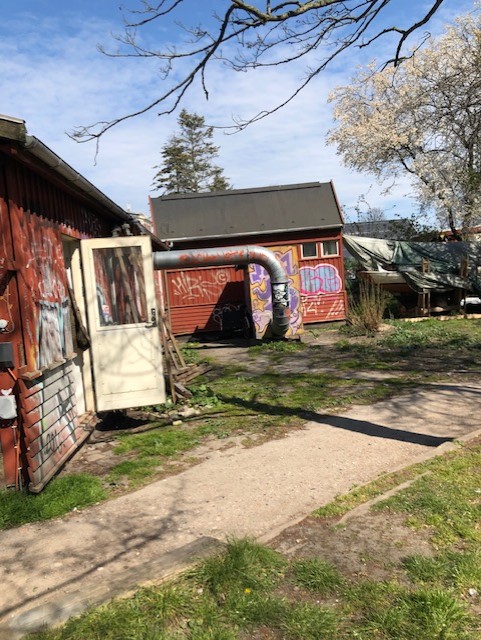 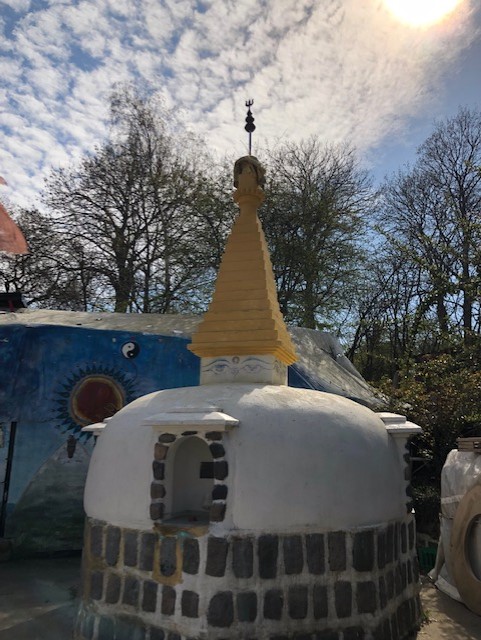 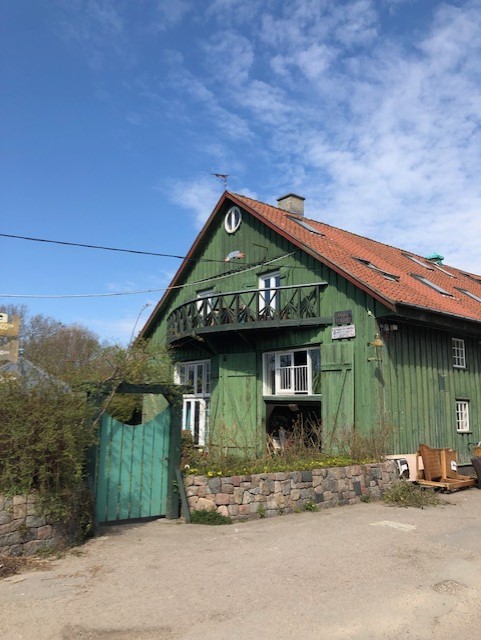 It might have been my sore feet talking, but I felt the slightest bit uncomfortable in Christiania Freetown. There are a significant amount of left over hippies lounging on the same bench they first slept on 1971.

Please visit www.wikipedia.org/wiki/Freetown_Christiania for the history of the area. My feet were not wrong, so please take care.

Today, Christiania Freetown is the fourth visited tourist attraction in Copenhagen. People of all ilk enjoy visiting this social experiment.

In two days in Copenhagen, I clocked over 25 miles on pedometer. No wonder my dogs were barking!