Visiting Ireland in July during the Lughnasa is a delight. You won't be guaranteed perfect summer weather, but if hiking Croagh Patrick, near Galway, can absolve you of all sins for the year, you can get away with swearing about the rain.

A great way to learn about travel is by conversing with people you meet on the road. Last year, I met an Irish lady while in Nepal and we discussed spiritual pilgrimages as our van bumped through the pitted streets of Kathmandu. I had walked the Camino and she had done the Reek Sunday hike up Croagh Patrick.

Bill Bryson challenged me to hike the Appalachian Trail and I've yodelled my way through the Swiss Alps pretending to outrun the Nazis. I've bucket listed the PCT, as per Cheryl Strayed (minus the personal demons) and will someday conquer the Lost City of the Incas.

But of hiking up an Irish mountain in bare feet on the final Sunday of July, I was completely unaware. This was so unique to me that the moment I returned home, I booked my flights and prepared for my pilgrimage, along with sister Phyl and daughter, Emily, to the west coast of Ireland.

Croagh Patrick, meaning 'Patrick's Stack', is located near Murrisk, and is the most religious mountain in Ireland. 'The Reek', as it is also known, has an elevation of 764m (2504 ft), making it the third highest in Mayo. According to tradition, Saint Patrick fasted and prayed on the summit for forty days in the year 441.

The mountain is quartzite and has a geological history of 750 million years. Veins of gold reflect the sun's light and gives the mountain a glow. This glow attracted invading clans to settle this part of Ireland from at least 5800BC. That gold is still within the sliding shale of Croagh Patrick as this sacred mountain is protected from mining.

Depending on fitness, the mountain should take between 2.5 and 3 hours to ascend, and 1.5 to come down. A statue of St. Patrick marks the start of the path, along with a sign explaining the rules and benefits of this pilgrimage.

The best benefit to completing this hike is that if done in June, July or August, (along with confession), you get absolution for your sins! I set about thinking of all the sinning I could do for free and it did make me climb a little bit faster.

I admit, we started sinning before we even arrived. At first sight of Croagh Patrick, the Lord's name was misused in colourful language many, many times. I am also pretty sure Phyl, in the back seat of the car, was praying to any God that would listen (idolising other Gods, sin) as well as throwing some Mother******'s in my direction, which is a sin against the mother, father, and also me.

The first hour of our hike was a test of endurance. The second, a test of agility. The third, a test of patience with other pilgrims combined with a scornful resentment of improper footwear. All of these express, to a certain extent, selfishness, which is a sin. Except for resenting sneakers, which a misdemeanour crime at best. In truth, I should have been worshipping my sneakers (though I think this might be worshipping false idols), as I was lucky to have them. We should have been bare foot.

Climbing at times requires you stay close to the ground, using both hands and feet and a keep a steely concentration at the task at hand. Having encouragement from your fellow hikers (selflessness; opposite of sin) seems shallow at best. Hearing 'Nearly there', while being no where 'near there' made me want to commit some really big sins right then and there.

Finally, the summit! You cannot fault these stunning views of Clew Bay and County Mayo. Aside from inclement weather and sleeping on rocks, St. Patrick could not have picked a more beautiful place to spend 40 nights. 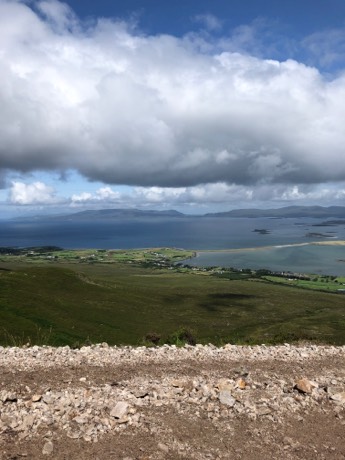 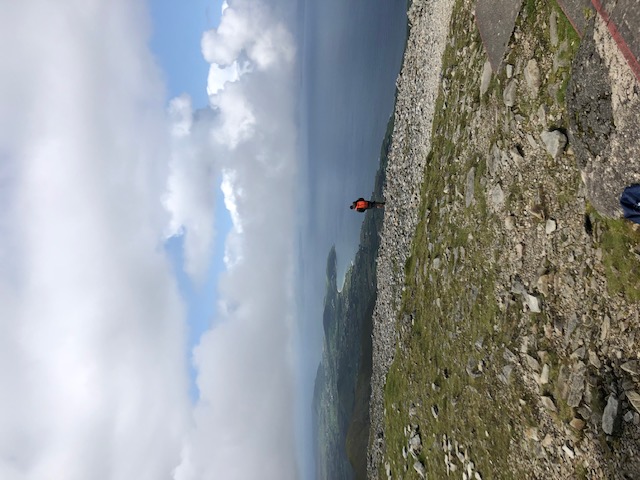 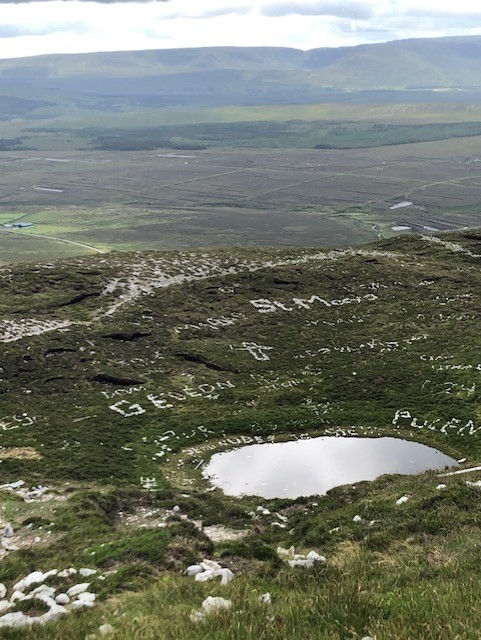 'St Patrick's bed' is a monument for the saint himself and near to the summit. More curious was the pile of rocks nearby that included a ceramic statue of the leaning tower of Pisa. A happy Italian must have left that one behind.

Emily, both younger and more fit than I (sin, envy), had sprinted up the Reek without much trouble. But, as an astrologer once told me, I am part goat, and got my own back during the decent. I swiftly scrambled down over the shale that had formerly given me so much trouble. I also fell over seven times. Once while eavesdropping (disrespect, sin) on a conversation, I laughed out loud, fell over, and required the help of the gentlemen I was eavesdropping on to get up. As soon as I was up, I fell right back down. They only helped me once (that sin is on them).

I wasn't the only one slipping. In fact, watching people descend this mountain was a lot like watching people on ice who don't know how to skate. It's funny (oops, sin).

Heavenly decent! Finally on flat land, we thanked St. Pat, jumped in the car, and drove to Westport to murder (sin, mortal) a burger and have a wonderfully gluttonous (sin) lunch.

Westport, settled by the Normans, is Georgian in design. The town centres on the Carrow Beg river, which is bound by stone walled promenades and bridges. Narrow, tree-lined streets burst with shops, eateries and people enjoying this beautiful town, shadowed by the glimmering Croagh Patrick.

Tired, and full, we headed back to Galway to enjoy our much needed massages at the Galmont Hotel and Spa. The drive from Westport to Galway is a bit over an hour. This was a good time to reflect on our achievements (pride, sin) while enjoying Ireland's beautiful countryside.

I will do a few things differently when I next attempt Reek Sunday weekend. I would have enjoyed more time in Westport and will stay overnight there next time.

I will wear shoes with better grip for navigating the loose shale. I will not unknowingly carry a large envelope containing Euro coins in my back pack. I will sin a whole lot more before, after and during my climb to the summit of Croagh Patrick.

A Few Things to Consider:

On April 18 or August 24, the sun casts a perfect shadow on the Boheh Stone. This is Neolithic rock art said to have been carved into the stone some time around 3800BC.

The visitor's centre at Croagh Patrick is closed. There were a few stalls selling trinkets and water, and a small cafe in the parking lot. There are parking attendants to manage the traffic.

There are restrooms at the base of the path, and at the summit, though it was not clear to me if the summit washrooms were open.

There are several fervent religious citizens at the base of the mountain handing out conversion paraphernalia.

Westport is very busy and parking is limited.