It was time to leave the beautiful Stowe Mountain Lodge. Marcia was driving, as usual, with me as co-pilot and Phyl in the back. Lost in conversation, Marcia and I really didn't notice how it all went wrong in Waterbury, VT. However, you can be sure Smug Navigator Phyl didn't drop a beat.

"I think we are going north." Phyl interjected into the conversation.

"Don't be silly, we are following the sat nav." I replied, brushing her off as if she were someone who didn't quite understand the wonders of modern technology.

"I think we are going north." She said again, after about ten miles. "We should be going south."

"Of course we are going south!" I whined. "We are correct, don't worry." I then turned to Marcia, "I think somehow we are going north. We cannot let her know she was right, she's so smug with navigation. Turn around at the next exit"

"We are going north, aren't we?" Phyl said smugly from the backseat. I lied that we had to take the I 89 in order to get to the I 93 and that she was dead wrong.

Comfortably going in the correct direction again, we resumed conversation. Luckily, Marcia, a very skilled driver, managed to hover aside large trucks as we passed highway exit signs for Stowe.

We had fooled Phyl; she had no idea we had just gone 20 miles out of our way.

3 hours and 50 minutes later, we completed our 3 hour and 20 minute drive from Vermont to Boston, MA., and happily left our car with the Kimpton Nine Zero valet.

The Kimpton Nine Zero is a very cool, boutique hotel adjacent to Boston Common. Though the valet parking, just off Tremont Street, was a little difficult to find, and slightly stressful due to a limited amount of space, the valets were so assuring and friendly I barely noticed the valet charge. They also give a discount for energy efficient cars, which is a nice touch. The hotel itself debuted a transformation in 2018. 195 rooms and suites are decorated with sumptuous colours and textures, furnished with comfortable, high end furniture and decorative touches. Our room was large and very comfortable. There is a cozy communal living/working space on the ground floor, and what will be a top flight restaurant, which was not yet ready during our stay.

Tremont Street begins at Government Center and forms the east border of Boston Common, the oldest public gardens in the USA. Park Street connects Tremont and Beacon Streets to complete the three sides of the square where we will begin our final day in Boston by walking The Freedom Trail.

There are 17 sights on this 2.5 mile walking tour of Boston. This might sound like a naff way to spend your holiday, but walking the Freedom Trail takes you through everything you want to see in Boston, the city where American Liberty all began. Booking a Foundation Tour with an historical guide dressed as a Minute Man or 1700's pub landlady is always informative and fun, but it covers just over half of the trail and will cost just under $30. It is just as easy to print out a map and go at your own pace and make up your own jokes. How long the trail takes you to complete will depend on how fast you walk and if you want to enter and explore the attractions.

Armed with my mobile phone map guide, we set off to do a better job conquering Boston than the Redcoats did in 1776. It was pouring with rain, which was a benefit as there were less tourists on the trail. We managed to finish the walk in just about two hours, even though we somehow walked 8.8 miles instead of the promised 2.5, and even had time for a which side step into the Paul Revere house.

As you might know, there is a lot to see on the Freedom Trail. Phyl and I had a lot of laughs and saw a lot of sites. But when I asked Phyl to refresh me about everything we said, did and saw while on our whirlwind waltz along that red-brick road, she answered:

" You have no sense of direction." So much for memories.

Here are all the stops along the Freedom Trail:

2. Massachusetts State House: 1798, Charles Bulfinch. Featured in films The Verdict and The Departed.

4. Old Granary Burial Ground: 1660, Tremont Street. The final resting place for Paul Revere, Samuel Adams, John Hancock and Robert Treat Paine. It is also the burial ground for the family of Benjamin Franklin and initial victims of the Boston Massacre. Mary Goose is also buried there. She is rumoured to have been Mother Goose, though this is unlikely. Still, goose feathers adorn Mary's plot.

6. King's Chapel Burial Ground: 1630, Tremont Street. The oldest burial ground in the city and final resting place of Ralph Waldo Emerson's father, William, Mary Chiltern, the first European woman to set foot on American soil, and Elizabeth Pain, whose headstone is said to be the inspiration for Hester Prynne's headstone in The Scarlet Letter.

7. Benjamin Franklin Statue: School Street. This statue, which honours the statesman and inventor, graces the grounds of the Old City Hall. 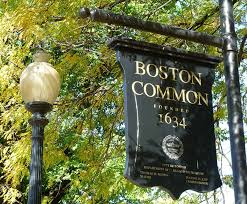 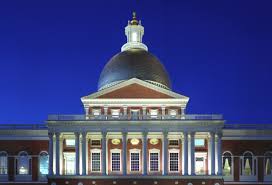 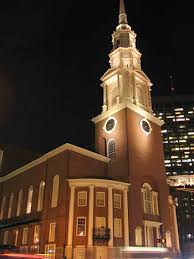 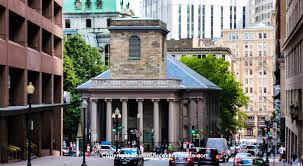 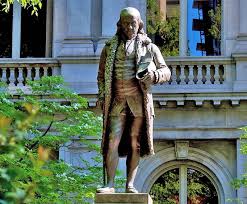 8. Old Corner Bookstore: School and Washington Streets. Former home of Anne Hutchinson, who was expelled from Massachusetts for heresy in 1638. In the early 19th Century, it was a publishing house and meeting place for writers such as Charles Dickens, Ralph Waldo Emerson, Henry Wandsworth Longfellow and Oliver Wendall Holmes.

9. Old South Meeting House: 1729, Milk and Washington Streets. A congregational Church best known as the meeting place for the organisers of the Boston Tea Party.

11. Boston Massacre Sight: 1770, King Street. Citizens were cornered against a wall by British soldiers resulting in the death of five, and spurring on the American Revolution.

12. Fanueil Hall/Quincy Market: 1743 marketplace and meeting hall. Currently still a marketplace, with food stalls and restaurants, including Cheers, named after the Tv show, but not of it's original location.

*The New England Holocaust Memorial is located in Carmen Park on Congress Street. It is a collection of six, 54 foot tall glass towers are separated by granite pathways and etched with millions of numbers that signify the human beings murdered during the Second World War.

*Marshall Street is a tiny little cobbled avenue not far from the Holocaust Memorial and Haymarket. Here you will find the historic Boston Stone, which served as a marker for surveyors. Opposite the stone is the home of Ebenezer Hancock, John Hancock's younger brother. On this little street are also little pubs with live music that lead to the most wonderful atmosphere.

*Another interesting landmark in this area is a statue of a donkey outside the Old City Hall, School Street. A plaque tells the tale about how the donkey was adapted as the mascot of the Democratic Party. 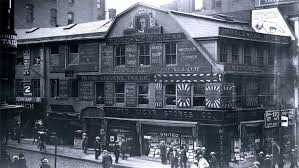 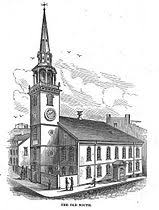 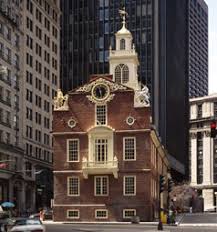 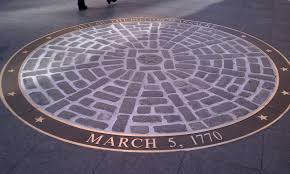 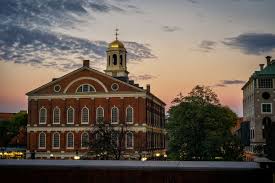 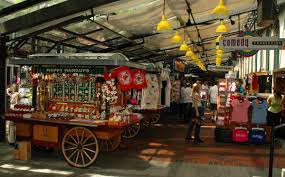 *The first time I tried to walk the Freedom Trail, it disappeared under a heap of vegetable matter at the Haymarket open air greengrocers, 100 Hanover Street. I think I gave up quickly after this, but that was a long time ago, and the trail, then just a series of yellow dashes painted on the road, has been done over with lovely red brick work laid into the pavements and sidewalks. It is now much harder to lose under rubbish.

13. Paul Revere's House: 19 North Square, 1680 This Colonial style house was the home of Patriot Paul Revere's house during the American Revolution, and his famous 'Ride'.

14. Old North Church: 193 Salem Street. "One if by land, Two if by sea." The famous phrase related to Paul Revere's midnight ride to warn the rebel forces that the British were coming.

*The North End is also the home of Boston's Italian American community and is filled with restaurants, quaint little churches and Madonna and Child blessings posters. This is also the location of the famous Mike's Pastry's. Stop by for one of the many cannoli flavours and assorted pastries.

16. USS Constitution: 'Old Ironsides' Named by George Washington, this is the world's oldest commissioned navel vessel still afloat. Launched in 1797, her duties were to provide protection to merchant ships during the Quasi-War and the First Barbary War against Barbary Pirates. This is also a good opportunity to see Boston Harbour.

17. Bunker Hill: Erected between 1825 and 1843, this monument commemorates the Battle of Bunker Hill, fought on June 17, 1775. The obelisk is located in the Charleston, the oldest neighbourhood in Boston, and a beautiful collection of Colonial architecture. 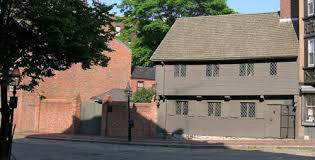 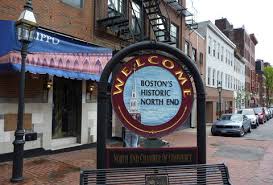 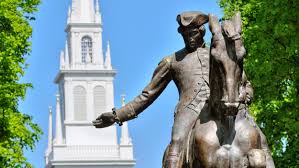 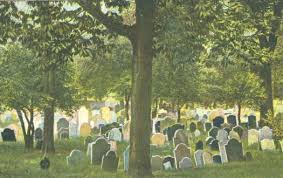 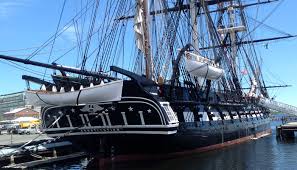 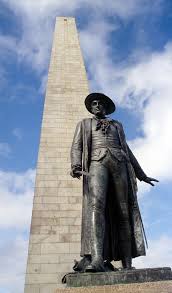 If shopping is on your agenda, take a stroll down Newbury Street. Located in the beautiful Back Bay area, all the trendiest and designer shops and eateries are installed in traditional Brownstone townhouses.

Hop on over to the 'Pru', or Prudential building, that has a bottom level mall with department store shopping.

And if you have that little bit of extra time, try to explore Beacon Hill. Here you will find listed architecture, the Scarlett O'Hara House, which is an exercise in Illusionism Art, and some cheeky fun. Also on Beacon Hill is Louisa May Alcott's childhood home at 20 Pinckney Street, and her final home at 10 Louisburg Square. There is a Women's Trail available in Boston as well, which I have not attempted yet.

Not far from Fenway Park, a great afternoon at the ballpark if the Redsox are in town, and near the Back Bay Fens, is the Fenway-Kenmore Neighbourhood. Located here is the Isabella Stewart Gardner Museum, 1903. This museum, built by Stewart Gardner to house her immense art collection, is a beautiful Italian Villa smack in the middle of Boston. 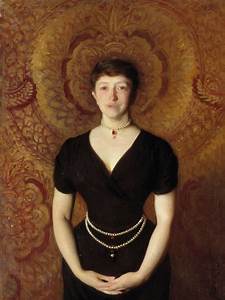 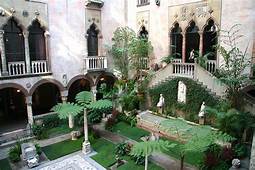 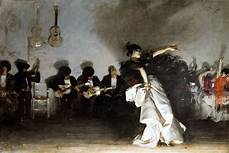 Stewart Gardner was a patron of John Singer Sargent, who produced many beautiful pieces while installed there as an artist-in-residence. It is also the setting for one of the largest art thefts in modern history. Empty frames still grace the walls from where the pieces were cut from there frames and carried away never to be found.

A fun excursion outside of Boston is a 35 minute drive to Salem. It's a fun little trip where you can see some traditional New England architecture, along a few witches. The gem here is The House of the Seven Gables. This is a 1668 Colonial mansion that was the inspiration for the gothic novel by Nathaniel Hawthorne.

Boston is probably my favourite city in the USA. It is mid-sized and manageable, rich in history and architectural beauty. And there is always something new to learn. Plus it is close to the sea and to the White and Green Mountains of New England. Absolutely beautiful country!